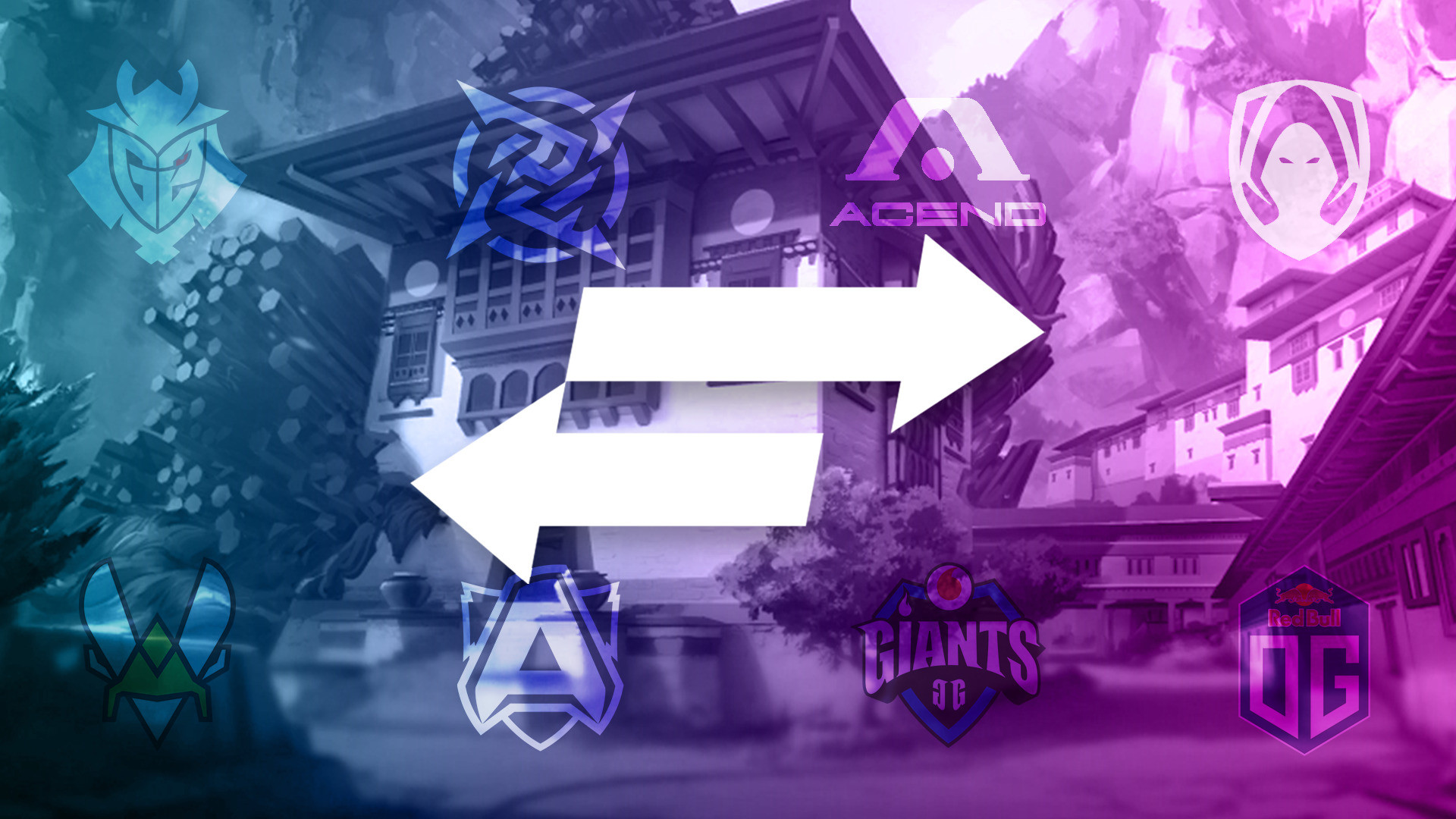 Posté par neLendirekt,
An overview of the different information and rumors surrounding the European VALORANT scene. It is very important to note that nothing is set in stone, unless it is specified.
The Valorant European scene is in full turmoil with moves at all levels. Most teams are definitely planning changes and things are still extremely volatile. We'll try to summarize the current trends and how things might develop.

It is important to keep in mind that many of these moves may not happen at all, as they are trials or options under consideration. They do, however, give indications of a possible evolution of the rosters. The reasons for the potential failures of these moves are various: an other opportunity for the team or player, tough negotiations, lack of a suitable replacement, change of plan, etc.

Let's start with G2 Esports, the main player in these changes and the one that will really start this domino effect. It seems clear that Carlos "ocelote" Rodríguez has made VALORANT a priority and seems to be giving himself the means of his ambitions. After a failed VCT phase 1 and a very average phase 2, G2 has decided to reconsider its strategy.

As we announced more than 10 days ago, Oscar "mixwell" Cañellas and Jacob "pyth" Mourujärvi will stay in the team to rebuild the project while Ardis "ardiis" Svarenieks, Patryk "paTiTek" Fabrowski and Aleksander "zeek" Zygmunt will be removed.

The arrivals of Žygimantas "nukkye" Chmieliauskas and Auni "AvovA" Chahade should be finalized soon, only the role of in-game leader is not yet determined. Jose Luis "koldamenta" Aranguren and Alex "ALEX" McMeekin still seem to be the favorites for this position.

Regarding Heretics, things seem much more complicated today. With the loss of nukkye and AvovA, it seems that the organization has decided to start from scratch. Ruben "RUBINO" Villarroel announced his departure yesterday on twitter and Melih "pAura" Karaduran could potentially move on to a new project.

Christian "loWel" Garcia Antoran would be the only player of the former squad involved in this new adventure. Negotiations with Patryk "paTiTek" Fabrowski and Ardis "ardiis" Svarenieks are in progress to rebuild a project. Other names have not yet been announced, we will keep you informed once things are clearer. Heretics seems to be facing quite a challenge to get back to the top of the EU VALORANT scene.

The case of Acend is much more worrying. Everything seems to indicate that the formation is now in a precarious situation. With Jose Luis "koldamenta" Aranguren close to G2, this departure could mean the end of this great tale. As things stand, Patryk "starxo" Kopczyński and Santeri "BONECOLD" Sassi have been trying out for different teams and Mehmet Yağız "cNed" İpek could be looking at a new project.

So the situation is not clear at all at the moment and according to our information, the organization is not willing to sell its players, which could solve all the problems... if the players agree to play together again as if nothing had happened. Definitely a complicated situation that will evolve once G2 settles on its final roster.

Alliance has very swiftly established itself in the European top ranks thanks to simple and logical choices. No glitter, only common sense. But it seems that this has its limits, because Thomas "kAdavra" Johner, is no longer part of the team, as announced by upcomer. His performance is not in question, but internal problems seem to be the reason for this separation.

The case of Alexandre "xms" Forté is also in question, especially because his trial contract will come to an end. Other movements are therefore possible. According to Krystian Terpiński from eweszlo.pl, Aleksander "zeek" Zygmunt and Kamil "baddyG" Graniczka had trials with the team.

Since the arrival of Kevin "Ex6TenZ" Droolans, NiP has a much improved face and has positioned itself in the top of the European scene. However, the team is still missing a little something to take it to the next level. Could a change fix that? In any case, according to our sources, Charles "CREA" Beauvois and Yaroslav "Jady" Nikolaev (as reported by upcomer earlier today) could be dropped and make room in the lineup.

To replace them, the names of Thomas "kAdavra" Johner, Santeri "BONECOLD" Sassi or Adam "ec1s" Eccles have been reported to us, as they have done tests with the Ninjas. Of course, nothing is set in stone and things will certainly evolve.

The surprise team of the very first Challengers on VALORANT, OG has never backed up this performance which now clearly appears as a "one-shot". Dylan "aKm" Bignet was benched for personal reasons, but his return does not seem to be planned at the moment. Other changes are likely with notably the frequent absence of Dragan "elllement" Milanović and Théo "OniBy" Tarlier during the various praccs played by OG.

elllement would currently play with HSDIRR past players Benjamin "vicious" Guilotte & Oscar "ozzy" Scott and former fnatic Muhammad "Moe40" Hariff and Kostas "tsack" Theodoropoulos, as announced by upcomer). This squad could be modified, however, as the project members are open to any offer.

Rumors also suggest that Issa "ISSAA" Murad, currently benched and under contract of the OG CS team has been tested. An information that we have not been able to confirm.

For its part, barring a great opportunity, Vitality doesn't seem to be planning any changes at the moment. The team has already added two players a very short time ago and showed much better things, so the French organization could give the lineup a chance. However, the market can change quickly and everything remains open.

Only one change has taken place behind the scenes, it is the release of Andrey "Fragon" Katz, who is no longer the coach of the team as of today.

Melih "pAura" Karaduran and Mehmet Yağız "cNed" İpek's new project could be at home in Turkey. Indeed, rumors of a Turkish "superteam" are starting to spread, and early information announces Batuhan "russ" Malgaç from BBL Esports in this new team. Players from Futbolist would also be involved, but no names have surfaced yet.

On paper, seeing some of the best Turkish players grouped together would certainly allow them to fight against the best teams in Europe. If this hypothesis makes many people dream, this project seems very complicated to achieve, because Acend will not let go of its star so easily, just like Heretics who could very well rebuild with pAura.

Surely the least kept secret of the scene, the departure of Daniil "pipsoN" Meshcheryakov from Giants might finally happen. It is the Pole who played at Finest, Michał "MOLSI" Łącki who could take his seat.